Chase Controls Corp. utilizes the CDMA2000 or IS-2000 cellular data network standard.  The CDMA2000 wireless air interface standard is known by many terms, including:  1x, 1xRTT, IS-2000, CDMA2000 1x, and CDMA2000.  The designation 1xRTT is frequently used to identify the version of CDMA2000 radio technology that operates over 1.25-MHz radio channels (one times 1.25 MHz).  The first phase of CDMA2000 is called 1xRTT.  1xRTT provides maximum theoretical data rates of 144 Kbps (downlink) and 144 Kbps (uplink).  Subsequent phases of CDMA2000 post-1xRTT introduced EV-DO Rev. 0 and Rev. A with much higher throughput speeds.  1xRTT is commonly referred to within the industry as being 2.5G technology.  EV-DO Rev 0/Rev A are 3G technologies.  LTE is the basis for the fourth-generation (4G) CDMA wireless data network.  4G networks are comprehensive IP solutions that deliver data solutions almost anywhere, and offer greatly improved data rates over previous generations of cellular wireless technology.

In a typical network setup, users experience a data network through their WCU modems.  However, it is common to have wireless routers supporting the access needs of customers.  This is the subscriber’s point of entry for network access, and system-wide applications for using SCADA data.  In terms of the network, WCU modems are the mobile stations that function as a mobile IP client in a CDMA2000 1x and EV-DO network.  Mobile stations consist of a radio, baseband processor, and a general-purpose processor for interfacing to a hosting computer or industrial controller. 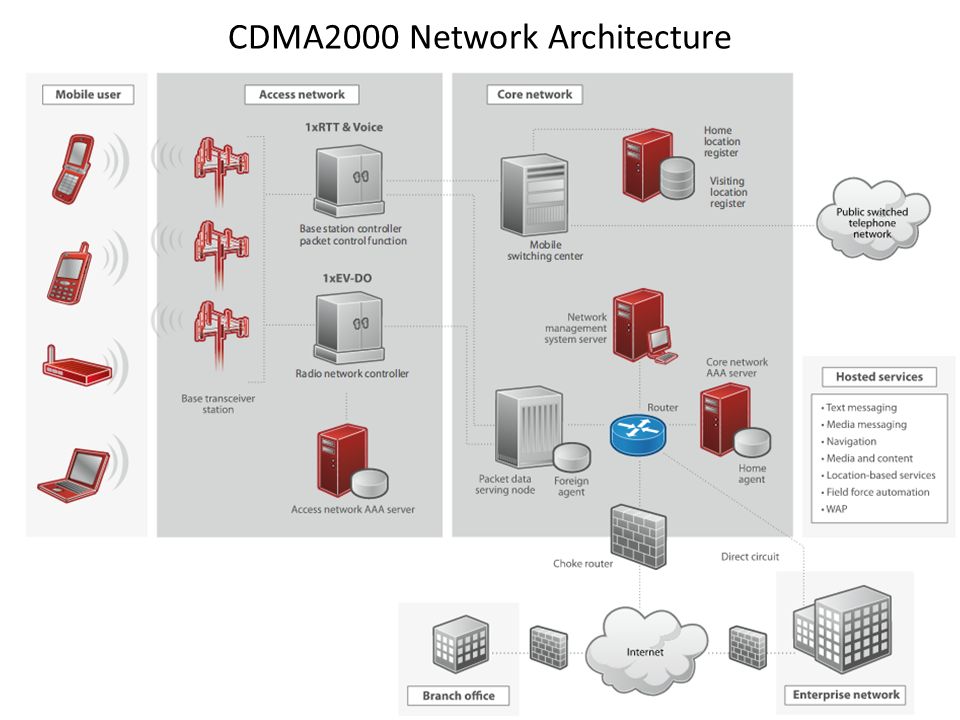 The RAN is the subscriber’s entry point into the wireless cellular network.  It’s here that the CDMA2000 Wireless data network differs from a typical network setup.  This part of the cellular network is responsible for delivering packet services for 1xRTT and 1x EV-DO connections, making it possible for users to expand their mobility, experience better access, and deploy system-wide applications.

The base transceiver station (BTS) is physically composed of antennas, towers, and sophisticated electronics.  These all work together to control the air-link and act as the interface between the network and WCU stations.

Radio resources are also managed by the BTS.  Radio resources include the radio frequency and channel assignment for each mobile station, the power level of transmit and receive signals, antenna sector assignments, and signal separation.

The BTS manages back-haul connections to the base station controller (BSC) in order to minimize redundant traffic and traffic delays.  The communications protocols used between the BTS and BSC are proprietary.

The BSC acts as a link for packet switched data messages between multiple BTS units. The BSC is also responsible for mobility management and handoffs between BTS units that are within its domain. It handles the overall call control process. The BSC connects to the core of the network using connectivity options that vary depending on whether it is voice, data, or signaling information.

The role of the core network is to act as the gateway between the radio access network and the public or private networks that will handle the packet data. It provides connectivity authentication, authorization, and accounting (AAA) services, acts as the gatekeeper for access to hosted and other network services, and manages IP addresses. These functions contribute to the overall ability of the network to offer users mobility and secure access, and to extend applications across the SCADA system.
The core network comprises the following key elements:

The PDSN services the radio access network and acts as the primary gateway into the public or private network, granting users secure access to network data and applications.
The PDSN manages the interface between the BSC and BTS, and the IP network by establishing and terminating the mobile client link layers. The PDSN terminates WCU station Point‐to‐Point Protocol (PPP) services for the WCU stations it services. It provides IP services for the WCU stations based on the services requested and authorized.
Each PDSN supports simple IP (SIP). When SIP services are provided to the WCU station, the PDSN acts as a standalone network access server (NAS) and can provide SIP services to the WCU station. The PDSN authenticates users locally, or it can forward authentication requests to the AAA server and home agent when users move from one PDSN to another support SIP.
The PDSN records packet billing information in coordination with the BSC and actively manages subscriber services based on the device profile information it receives from the services and AAA servers. The PDSN routes packets to the external public or private networks or to the home agent (HA), which can be secured via secure Generic Routing Encapsulation (GRE) tunnels.

The AAA server and HA are used to authenticate, authorize, and account for a device’s access to the network and network services Home Agent Support Mobile IP.

A Cisco client end router is configured and provided for the customer Master Telemetry Location, to provide a dedicated secure tunnel to the ChaseNet Wireless SCADA Communication System. A customer provided static IP address is required for external access from the Chase Wireless Private Network router.